You have probably seen your yoga and meditation friends wearing tasseled necklaces and wondered what are mala beads? A mala is a simple string of beads used in japa meditation to count mantras, prayers, or intentions. Malas can also be used to count breaths or used in a gratitude meditation. Mala is a Sanskrit word meaning garland. Malas are a type of meditation beads or prayer beads and are ancient tools that were developed to keep the mind focused and clear from thoughts.

A full mala contains 108 counting beads plus one guru or meru bead. Usually, a 108 bead mala is long enough to wear as a necklace. A mala can also be strung as a half mala containing 54 beads, or as a wrist mala with 27 counting beads to be worn as a bracelet. The guru (teacher) or meru (mountain) bead is often larger than the other counting mantra beads and it provides a starting and ending point for counting the repetitions of the mantra. A tassel is connected to the end of the guru/meru bead to finish the mala with a final knot. Mala beads are also referred to as mantra beads, meditation beads, Hindu rosaries or Buddhist prayer beads. 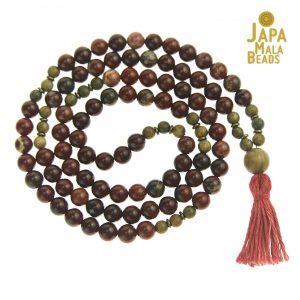 The number 108 has a very powerful significance in the science and spirituality of India. There are 108 letters in the Sanskrit alphabet! Vedic mathematicians measured the Sun’s diameter to be 108 times larger than the diameter of the Earth, measured the distance between the Sun and Earth to be 108 times the Sun’s diameter. In the yogic tradition, we find 108 sacred texts of the Upanishads, 108 sacred holy sites in India, and 108 marma (acupressure-like) points on the body. In the bhakti yoga tradition stories are told of 108 gopis dancing with Krishna in Vrindavan, and there are 108 names of the goddess. In tantric yoga, 108 energy lines are described throughout the body and they all converge and connect at the heart chakra.

What are malas made from? 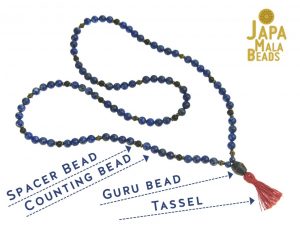 Malas can be made out of many different materials. The most common types of beads used in a mala are made from wood, seeds, or semi-precious gemstones. Depending on the material used, the properties of the beads will have certain energetic effects. Different spiritual practices and religious traditions historically have used beads of a specific material. In India, malas are primarily made from sandalwood, tulsi, and rudraksha seeds. In Nepal and Tibet, most malas are made from bodhi seeds, lotus seeds, and bone.

Sizes and types of beads 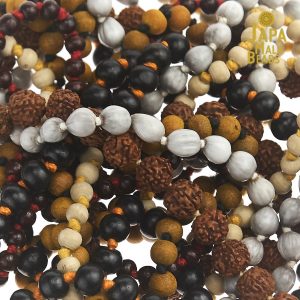 The counting beads in a mala are usually between 6mm and 10mm with 8mm being the most common. Larger beads will be easier to count and practice japa with but will make the mala longer and heavier. Mala beads can be made from a single material or several different kinds of wood and stone beads. Mala beads may also contain thin metal spacer beads that are used for decoration and are not to be counted. The guru bead can be the same size as the counting beads or can be larger to stand out more. The guru bead is typically made from the same type of material as the counting beads.

A mala’s tassel is usually made from cotton or silk. At Japa Mala Beads we use eco-friendly hemp for our tassels. It is typical to find malas strung with cotton cord or nylon string. For maximum durability, we use a super strong coated braided wire to string our necklace malas and a thick clear elastic to string our bracelet malas. Mala beads from India usually have knots between each bead, while malas from Tibet, Nepal, and China are not knotted between the beads. Some Tibetan style malas will have two counters attached to each side of the mala. These are used to count very large repetitions (hundreds to thousands!) of mantras and can be easily added or removed if necessary.

Check out our ultimate mala bead finder to filter all of our mala beads by gemstone, intention, chakra, price, color and mala style!

Mala beads are used in other cultures and religions but are known by different names, such as prayer beads, rosary beads, and worry beads. Over two-thirds of the world’s population employ some type of counting beads as part of their spiritual practice. The use of beads in prayer appears to have originated around the 8th century B.C.E. in India.

Beads by themselves have had a powerful influence and importance in human history. The oldest beads found to date are approximately 42,0000 years old. Beads have been used throughout our history as talismans for protection, amulets for luck, status symbols for wealth and authority, spiritual and religious tools, and as a form of barter. The meanings and use of beads have changed significantly over time—they have been used to symbolize personal and cultural relationships, physical, magical and supernatural power, and common cultural world-views.

What religions use mala beads?

Christianity, Islam, Buddhism, and Hinduism all use some form of prayer beads. Around the 17th-century Muslims began using prayer beads, called subha, misbaha or tespih. These prayer beads usually have 99 counting beads and one elongated terminal bead. Subha beads are used for the practice of zikr, the recitation of the 99 attributes or names of God.

Ireland is known as the origin for the Christian rosary in the 9th Century. The use and practice of the rosary was not officially approved by the church until the 16th Century when Pope Leo X gave the rosary approbation. Rosaries usually contain 59 beads and are used to count the prayers recited in honor of the Virgin Mary.

Kompoloi or worry beads have been used in Greek and Cypriot culture since the middle of the 20th century. The kompoloi have an odd number of beads between 17-23 and are not designed for spiritual purposes—they are used as a talisman or amulet to guard against bad luck and for relaxation and stress reduction.

Mala beads have been used in so many different spiritual traditions for so long because these beads have many powerful benefits for the body, mind and spirit. Some of the below eight benefits are universal for all types of prayer or counting beads but several of these benefits are specific to mala beads.

2. An efficient and practical tool to count mantras.

3. An easy way to keep track of the number of mantras recited.

5. Once mala is empowered it can be used for even more powerful healing of yourself and others.

6. Choosing a mala to purchase can help in process of determining goals and intentions and spiritual pursuits.

7. Seeing or wearing a mala can serve as a reminder of one’s intention and goals. It can also be used as a reward or symbol for accomplishing a difficult task.

How to Use Mala Beads

Now that you know what mala beads are, check out our complete step-by-step instructions on how to use and wear mala beads.

How to use a Mala

Shop for Malas by: